If you are looking for cheap flights on Emirates Airlines, you have come to the right place. SA Airlines is your 1-stop gateway to affordable air tickets online. Now you can search, compare and save with SA Airlines online.

To find the cheapest Emirates flights, use the above flight search form. Booking and paying securely online is quick, simple and secure. Book your flights with Emirates online or learn more about Fly Emirates now. 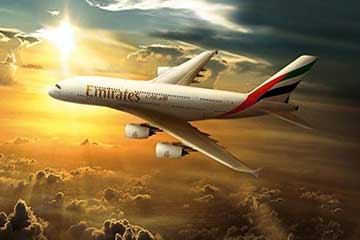 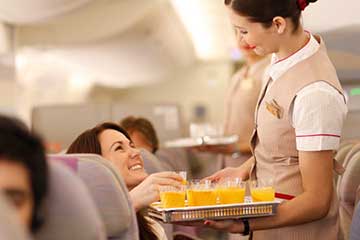 Having received multiple awards for service levels, you can be assured that you will receive the highest levels of service 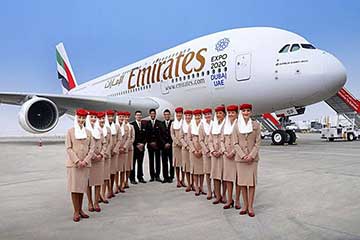 Emirates Airline, which is often simply called “Emirates”, is Dubai’s national carrier and is considered one of the world’s top 10 airlines, both in terms of earnings and passenger kilometres flown. It also operates 4 of the longest nonstop commercial flights in the world to Los Angeles, San Francisco, Dallas and Houston.

The airline operates from its primary hub at Dubai International Airport and offers affordable flights to over 140 destinations in over 80 countries across 6 continents. Emirates, with a codeshare agreement in place with South African Airways operates over 3 000 flights each week to destinations across the globe. The airline is synonymous with comfortable, affordable flights to the likes of Dubai, London, New York and a whole host of exotic destinations. Whether you are looking for cheap flights with Emirates or simply want to learn more about the company, you can do so here..

Booking your Emirates Flights online is Easy with SA Airlines

Booking your flights online cuts out the middleman - the traditional travel agent - giving you access to even cheaper international flights. Simply type in your departure point, destination, as well as your preferred dates. The system scans hundreds of airline databases to find you the cheapest international fares - be it on Emirates Airlines or not! Comparing flights has never been easier.

The very first Emirates flight routes were flown with a leased Boeing 737 and Airbus 300 B4 aircraft. The fleet has grown exponentially since then and includes a variety of Airbus A330, A340, A350, A380, and Boeing 777 aircraft. The airline is the largest operator in the world of the Airbus A380.


Emirates is an airline that is associated with service excellence, scooping four awards at the 2018 World Travel Awards Middle East, Best Airline Worldwide at the 2017 Business Awards and Airline of the Year at the 2018 Air Transport awards. Emirates also enjoys a 4-star rating from aviation consultancy Skytrax, making them a consistently good choice for comfortable long haul and international air travel.


Emirates has the largest international flight network in the world. Emirates Airlines South Africa operates flights from Johannesburg, Cape Town, and Durban to their hub in Dubai, daily.

Emirates Airlines offers passengers a choice of Economy Class, Business Class and First Class seats. When you book cheap flights with Emirates Airlines, you can expect the following baggage allowances to be imposed:

The Emirates Onboard Service & Entertainment


The Emirates Airlines in-flight entertainment system (Ice) and on board has been voted the best for 10 years in a row. The system offers a selection of information, communication, and entertainment to offer passengers an unrivalled on board experience. Passengers can choose from 3 500 channels of movies, music, TV shows, and games in a variety of languages. The system also caters for the hearing or visually impaired.

Need some help? Check out our flight bookings process page for more information.