Looking to book cheap Virgin Atlantic flights online? Search for flights, compare and save more with SA Airlines! Book your Virgin flight tickets now, or find out more about the airline below:

Established in 1984, Virgin Atlantic Airways, more commonly known by its trading name Virgin Atlantic, is a British airline that is majority owned by maverick entrepreneur Sir Richard Branson's Virgin Group. The Group owns a 51% stake in the airline, with Delta Air Lines owning a 49% stake.

Virgin had been a rival of British Airways since its launch, as at the time, BA was the only UK airline operating long haul flights to the USA, Far East and the Caribbean. The airline's founders originally intended for it to fly between the UK and the Falkland Islands. As of May 2014, however, the airline flies to over 30 international destinations, generating revenues in excess of GBP 2.9 million by 2013.

By 2012, the airline transported more than 5.4 million passengers, earning it the spot as 7th biggest airline in the UK in terms of passenger volumes. It recorded an operating loss of more than GBP 128 million in the financial year ending February 2013. 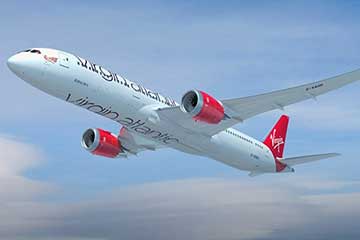 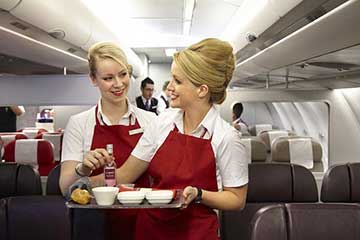 The service you will recieve when flying with Virgin is world class. From the check-in to landing you can expect the best 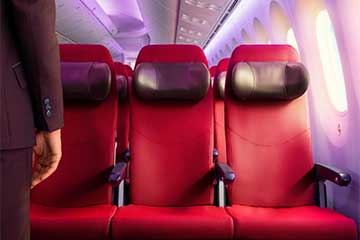 From economy to 1st class you experience awesome comfort. You have the option to free up the adjacent seat with Seat Plus

Virgin Atlantic offers air travellers a 3-tier cabin class configuration: Economy, Premium Economy and Upper Class. Unlike many of its competitors, Virgin does not operate a conventional business or first class service; instead, it offers a combination of the latter two cabin categories positioned as Upper Class. Seating is arranged in the herringbone design, offering more space and privacy. Upper Class passengers can also enjoy the airlines 6' 6" full flat beds and a range of other very useful luxuries sucfh as in-seat laptop power sources and leads for ipods.

All Virgin aircrafts are equipped with VERA Touch, an in-flight entertainment system that gives users access to movies, television series, music, video games and more. Virgin was also the first airline to offer personal entertainment across all classes, making it a leading brand in terms of passenger experience innovations. The airline's frequent flyer program is called The Flying Club, offering passengers the ability to earn miles and climb from Red to Silver to Gold status.

Virgin operates a mixed fleet of Airbuses and Boeings, two of which featured in the 2006 James Bond film Casino Royale. The airline has a total of 38 aircraft with an average age of 9.6 years (as at February 2014).

Book your own Virgin Atlantic flights now using the above flight price checking tool, or visit www.virgin-atlantic.com - not www.virginatlantic.co.za - to contact the airline directly.